Christmas in Italy is different

Everything about differences, customs and mores in celebrating Christmas holidays in comparison to Northern European countries such as Germany or Switzerland

In Italy have different customs than in Germany, Switzerland or other Northern European countries

Mary’s conception ( Immaculata Conceptio) is an ecclesiastical holiday of great importance in Italy. It’s like a little pre-Christmas holiday and is used by Italian families as a kind of preparation time for the big feast. The most visible difference is that the lights of the tree in the parlours and also in the streets already shine far out on December 8th. The tree and also the crib are festively set up and decorated on 8 December. In Germany and also in Switzerland the tree is not set before December 24. In Italy, the trees are not cut down as much as they are brought into the rooms with their roots or in artificial designs. For the traditional Presepe, the crib filigree figures are traditionally produced  by artisans. The figures have religious decoration motifs but also the life of the people from past centuries, very nicely arranged in authentic sceneries with great attention to detail. In southern Italy there is the biggest tradition of the Presepe and for tourists always the highlight of every visit to Naples in the Christmas season.

The weekend of the 8 December is also often used to enjoy the first snow of the season and the joy of skiing in the family. It is a fixed set part of the holiday planning in Italy.

This holiday is not celebrated in German-speaking countries. In contrast, the four Sundays before Christmas called Advent and the habit to light each sunday one candle is not common in Italy. As well as St. Nicholas Day on 6th December are completely unknown to Italians. Also the daily opening of the Christmas calendar is not practiced in the same way as it is traditionally in Germany or Switzerland. In the pre-Christmas period, children paint, write and craft their wish lists with all their wishes as soon as the holidays approach. Those will be sent symbolically to Santa Claus, the Christ Child and Santa Claus. In the hope that all wishes will be fulfilled. These customs are largely unknown in Italy. Kids are whispering their wishes in parents ear in hope they will be fulfilled.

However, the Christmas holidays are celebrated very festively. In contrast to other countries, 24th December afternoon is not as important as in the north. Christmas begins in Germany and Switzerland already in the afternoon with gathering of friends and family and the traditional Kaffee & Kuchen. For Italians the 24th of December is also a normal working day, one meets only in the evening with the family. Frequently games are made and one visits the midnight mass. This is where the actual Christmas begins. The Christmas greetings “Auguri di Natale” are only passed on to family, close friends and the neighbours on 25th December, on Christmas day “Oggi é Natale- tanti auguri”. Similar celebrations continue as in other countries, you meet with friends and family for lunch or dinner both on 25th December and 26th December.

On 24th December, the menu is exclusively based on fish  and vegetables. Fish and seafood fresh from the market will be eaten and, of course, the popular pasta will be served as primo piatto. Desserts include dried fruit, nuts, panettone or pandoro. Both are yeast cakes, one sprinkled with candied fruit and raisins, the Panettone and the other with icing sugar, the Pandoro.  On the 25th of December, a festive family lunch is particularly important. On this day, a pasta with meat is usually eaten as Primo Piatto as well as a meat dish as main course. “I dolci” vary from region to region. Beside the Panettone and Pandoro there is for example in the region around Naples the famous “Struffoli”. A dessert made from fried small dough balls coated with honey and colorfully decorated with crumbles.

Depending on the region, the traditional dishes are very different and varied. The Lunch is very festive and elegant, tables are decorated opulent with meticulous attention to detail, lots of candles, high quality of china and silverware are used. It showing that this day is very important as part of the tradition, religion and family values.

A remarkable difference to the northern European traditions is that the Italians meet during the holidays in the morning hours before the traditional festive meals with their friends for a so-called apero.  The streets are mostly full of people, live music comes from many of the day bars and there is a lot going on in the streets of the cities. There is an alegria around that is very much contagious. And the anticipation for the holidays is noticeable and visible in many cheerful faces around the streets.

The end of the holidays is marked by the Befana Day on the night of 5 January, and for the children, the Befana brings presents on that night. This tradition is similar to Santa Claus.

Highlights for your calendar

Starting in November the Light festival in Salerno “Luci d’Artista Salerno” Artistic lighting illuminates the southern port city and enchants the city into a Christmas wonderland. Now for some years you can admire the light show from November on until the end of the holiday season in January-it is a beautiful show.

Regional highlights in Sicily during the holiday season are the celebration of St. Lucia, which is being held on 13 December with the parade in Syracuse. St. Lucia is the patron saint of the city and the event attracts every year many visitors, tourists and Italy lovers from all over the world.

In Milan, many Christmas markets open on December 7th,  on the occasion of St. Ambrogio– the patron saint of the city of Milan. December 7th is also considered a very important date in the musical world, as it is the opening time of Every Years New Season at Milan’s famous opera house La Scala.

If you are curious now but leaving in Switzerland, come and visit us at Hotel Bernina 1865 in Samedan. We celebrate the holidays in a similar way being in Engadine. Our Chef cooking traditional Italian Home Cuisine will be delighted to spoil you. Please find the menu attached and for more information call us directly. 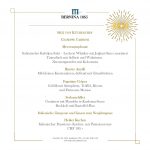 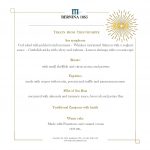 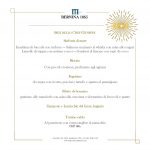 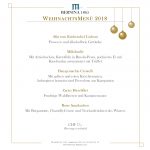 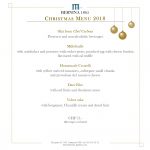 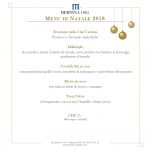