The past is guiding us until today

Welcome to the first hotel in the Engadin –

We keep the tradition of this region alive since 1865
1865 – the year in which slavery was abolished in the United States. Gregor Mendel discovers the rules of monogenic inheritance and Wilhelm Busch published the stories about the pranks of the two louts Max and Moritz, who have since inspired young and old and may well have inspired some of them.
In the same year the Hotel Bernina 1865 opened in Samedan in 1865 at one of the most important traffic junctions of the Swiss passes to Austria, Italy and on the north side of Switzerland. In its equally long history, it has been an important chapter in the development of Engadine tourism. 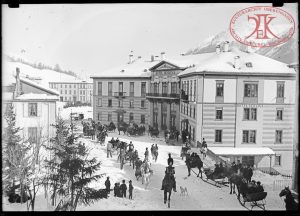 A la vue du Bernina
With a wonderful view of the Piz Bernina – the only four-thousander in the Eastern Alps and the highest mountain in Graubünden – an inn was initially built, the « A la vue du Bernina », which still stands below the hotel today. Its owners, first a builder from Samedan, later an Engadin nobleman, were supporters and promoters of the Engadin Winter Tourism, using their influence to promote the region around St. Moritz as a winter sports paradise across national borders. Finally, the Italian family Flanconi bought the inn and began immediately with the construction of the current Hotel Bernina 1865, which opened in 1865 after two years of construction. 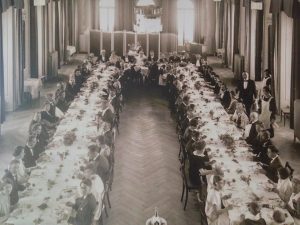 From the Bernina into the whole Engadin: cultural upswing

The Bernina 1865 was the first hotel in the Engadine. Even then, it was the hub of the travellers at the important traffic junction in Samedan. Opposite the old post office, the horses were changed at the Hotel Bernina 1865. Our current bar « Plazzet 20 » served at that time as a passenger room for European grand dukes. But with the completion of the two-storey Kaisersaal, the cultural upswing finally began – in the Hotel Bernina and the whole Upper Engadine. Concerts, plays, operas, etc. also lured aristocratic houses of the German Crown Prince on Princess of Thurn and taxis to Emperor Frederick III. and many more.

Peace and quiet hospitality
Check into a house that keeps the history and tradition of the Engadin alive since 1865! Immerse yourself in history and feel the grand flair – even for breakfast in our classicist Kaisersaal. Or just enjoy the view of the Swiss mountains in all their beauty.